Home Blog Does Diet Soda Go Straight to the Belly?

Does Diet Soda Go Straight to the Belly? 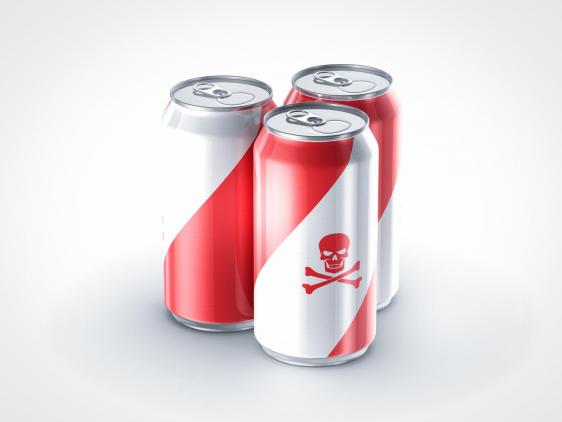 Nearly everything you read, hear and watch will tell you that sugar is nothing but trouble. Not only will it lead to weight gain, but also to diabetes and a host of other health problems. We�re told it�s something to avoid at all costs, and many of us go to great lengths to do so. Rule number one in cutting back? Stop drinking soda. It�s packed with sugar, to the tune of 39 grams in a 12 ounce can of regular cola (compared to 11 grams of sugar in three medium-sized chocolate chip cookies). Of course fruits and fruit juices also contain a lot of sugar, but at least you�re getting some nutrients in the mix. Soda is nothing more than wet, refined sugar, and is pretty much taboo for those of us trying to stay healthy and svelte. But rather than deprive ourselves of a sweet, fizzy fix, we opt for the obvious substitute�diet soda.

A new study published in the Journal of the American Geriatrics has concluded that the choice of diet over regular soda may not be quite so obvious. The study found that elderly people who drank diet soda over a 9-year period gained almost triple the abdominal fat as those who didn�t drink it. Specifically, the study concluded that the extent to which increasing diet soda intake was associated with escalating obesity was �striking�. That�s pretty alarming news for those of us who down a trough of the stuff every week, and definitely flies a red flag over this beloved �no-guilt� beverage.

Researchers analyzed data from 749 people aged 65 and older who were asked every couple of years how many cans of soda they drank each day, and how many of those sodas were diet vs. regular. Even after adjusting for factors like diabetes, smoking, and exercise, those participants that didn�t drink diet soda gained about .8 inches of belly fat compared to the 3.2 inches gained by those that drank diet soda. Those that only drank diet soda occasionally fell somewhere in the middle, gaining 1.8 inches around the waist, and the gains were most pronounced in people who were already overweight. This sort of waistline expansion is particularly worrisome because it is caused by visceral fat, which is linked to increased cardiovascular disease, inflammation and Type 2 diabetes.

The obvious question is: How can this BE?

According to the study�s senior author, Dr. Helen Hazuda, professor of medicine at the University of Texas Health Science Center at San Antonio, �Regular sugar has caloric consequences. Your body is used to knowing that a sweet taste means you are ingesting energy in the form of calories that, if you don�t burn off, are going to convert to fat.� She added that artificial sweeteners confuse the body and weaken the link in our brains between sweetness and calories, which can lead to even more intense cravings for sweets as well as to weight gain.

But diet soda fanatics shouldn�t despair just yet. The Calorie Control Council, an association which represents the reduced-calorie food and beverage industry, immediately issued a press release calling the study�s results into question. It argues that, since elderly people typically lose muscle mass, it is not unusual to see an increase in abdominal fat, and that the study results don�t adequately establish cause and effect. Further, without information regarding dietary or calorie intake, the Council claims that the implications of the results are �limited�.

It seems logical that less sugar is a good idea. Keep in mind, however, that there are more ingredients than sweeteners to consider when choosing a beverage. If you�re looking to improve your diet, soda of any type should be consumed sparingly. Water is still the best drink out there, and will never lead to belly fat.