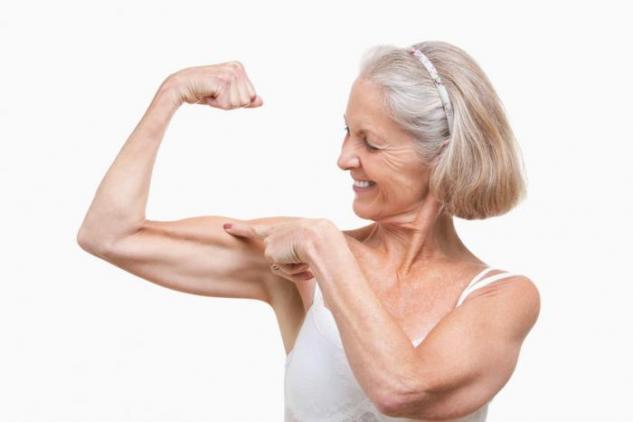 We've all heard plenty about osteoporosis (dangerously low bone mass), and its less severe sibling, osteopenia. Not as familiar is sarcopenia, the age-related decline in muscle mass and function. It's not as well studied, and its exact causes are still unknown, though it clearly contributes to frailty and a loss of independence in people's later years. The good news is there are things you can do to prevent its ill effects, and also to improve your condition if you're already feeling its consequences.

As a rule, muscle mass declines with age, starting in the 40s and picking up speed after about age 50. Then the typical rate of muscle loss really begins to outpace the rate of muscle gain, so that there's an increasing net deficit. How dangerous that is depends how much muscle you start out with. The kind of decline that makes a lifelong runner go from a very fast 10k time to a slightly slower one in his 60s is not a big concern (except for the frustrated runner). The kind of decline in muscle mass that weakens an already frail elderly person so much that he or she is more prone to falls and can't lift a small bag of groceries onto the counter is something to worry about.

While the precise causes of sarcopenia aren't fully understood, lack of exercise, poor nutrition, hormonal changes, and bodywide inflammation are all potential culprits. Some of those causes can be addressed, but there may simply be some inherent consequences of aging that can't be fully remedied that is, our frustrated aging runner is going to see his 10k time get slower, to some degree, no matter what he does. But when it comes to the activities of daily living, you can absolutely do something about that for your entire life.

The tool that everyone agrees works to shore up muscles: exercise, at every age. Ideally, that would include both a basic, progressive strength-training program as well as an aerobic fitness routine (like a brisk 30-minute walk every day). "Healthy muscle is not only about being stronger and bigger. Strength training that builds muscle helps keep older folks stable and surefooted, and strong enough to do basic things like get out of a chair. Indeed, some data suggests that men who lift weights a few times a week in their 50s and 60s can maintain their muscle mass, not simply slow the rate of decline, in those years. But to be healthy, muscle tissue needs to effectively store glycogen and have capillaries that infuse it with blood, both of which are aided by the aerobic component.

Researchers are also investigating the role of nutrition. Insufficient protein, especially if it's accompanied by insufficient calories in general, can contribute to sarcopenia. There's a debate among protein proponents over how much to eat, expressed in grams per kilogram of body weight, but the simpler rule of thumb is to eat small amounts of protein distributed throughout the day, he says. Aim for 4 ounces of quality protein, like fish, chicken, beef, or dairy products, three times a day, to maximize muscle growth. (Vegetarians can eat soy, a complete protein, or combine proteins like rice and beans to get the essential amino acids found in animal protein.) Four ounces isn't much about the size of a deck of cards so there's no need to go overboard.

Not every person needs to worry about sarcopenia. Many obese folks have muscle in addition to excess body fat, which may protect them but because obesity carries its own health risks, it's better to be leaner and build up muscle through exercise. See where this is going? A balanced exercise program, at whatever age or fitness level, is a good place to start to help protect against sarcopenia, as well as osteoporosis, and to promote other health benefits.